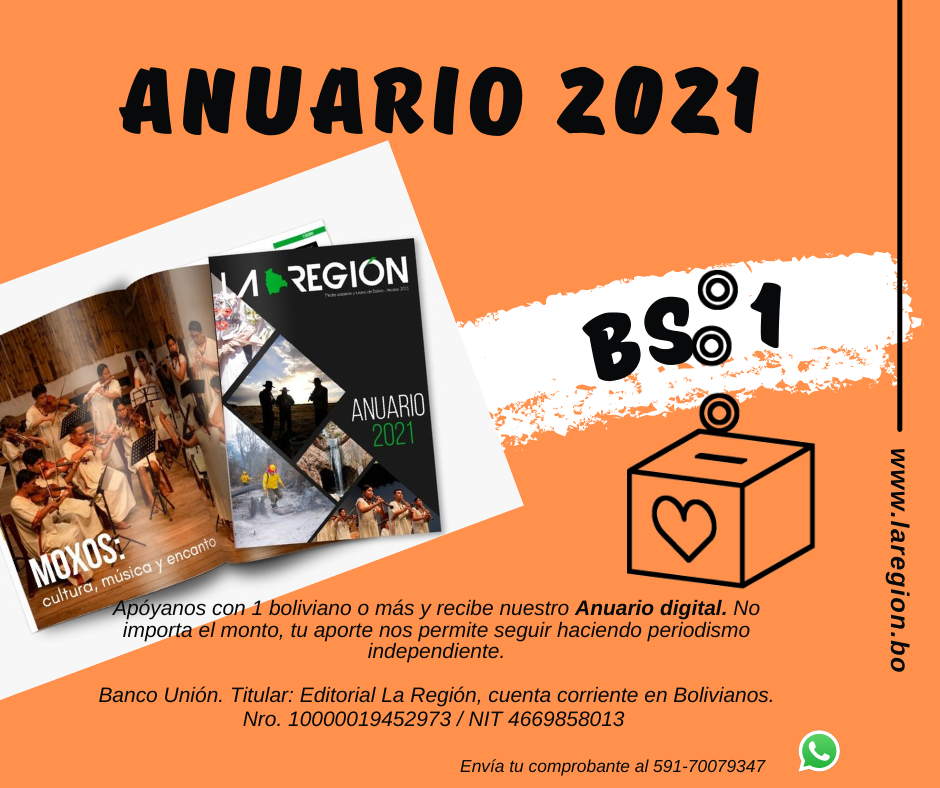 Claribel Villarroel, a biologist who conducts research in the reserve, describes this area as part of the Tropical Andes, known worldwide for its high biodiversity. “It is the water factory for many Chaco communities and habitat for large species such as the Andean bear (Tremarctos ornatus), tapir (Tapirus terrestris), jaguar (Panthera onca), and puma (Puma concolor). But it is also the most productive area of the department because it is humid and allows good production of corn, peppers, and potatoes,” he says.

At the time, much of the attention was focused on Santa Cruz, the department that – once again – faced the worst of the forest fires. Upon hearing the news, activists say that a call had to be made through social networks for national and departmental authorities to support firefighting. Food and equipment for the park rangers arrived from NGOs and citizen platforms in the department of Santa Cruz. Alas Chiquitanas Voluntarios, Amazon Conservation Team, Ríos de Pie, Fundación para la Conservación del Bosque Chiquitano (FCBC) and Fundación Yindah joined forces for the collection and transport.

“The famous air support never arrived. The only people who were there were the park rangers. Even one of them had an accident on his motorcycle that resulted in a fractured skull base. He stayed two weeks in the hospital in Sucre. The firefighters went to help, but they were not doing very well, because they were not foresters but structural (from the city) and they got lost in the area,” says biologist Mauricio Peñaranda, who also conducts research in the area.

Between September and November 2020, more than 3,600 hectares of the Iñao burned until the rain put out the fire. Of this figure, 3,296 hectares corresponded to the forest, according to a report by the Friends of Nature Foundation (FAN).

This was one of the 55 protected areas hit by forest fires in the last two years. In 2019 it had suffered burns, but not phenomena of such intensity. There were other national parks such as Otuquis, San Matías, and 20 other national and municipal reserves, which suffered fire onslaughts in both managements. Therefore, although the total area burned in 2020 was less than the previous year (more than 4 million hectares until October, according to the FAN ), there was a greater presence of fire within national and subnational protected areas.

Protected areas with the highest presence of fire

The list also includes the Noel Kempff Mercado and Aguaragüe parks; the municipal protected areas Reserva El Copaibo, Bajo Madidi, and the departmental reserves Iténez, the ANMI Río Grande Valles Cruceños, and Ríos Blanco and Negro, which in 2019 had not been impacted. Unusually, last year the last fires were put out at the end of November. Gran Chaco’s Kaa Iya and Iñao were the last to be extinguished, partly thanks to the rains.

“In 2020 many fires occurred in areas that did not burn in 2019. This is the case of the area of the Santa Cruz valleys, which does not have ecosystems adapted to the occurrence of fire. It can be said that the severity (of affectation) in that area is not going to be low, but more than medium-high. This implies that there will be a drastic change in biodiversity and, therefore, in the ecosystem services it provides,” says Daniel Villarroel, FAN’s assistant manager of Ecosystem Research and Monitoring.

In Santa Cruz, two of the areas that burned most intensely with respect to 2019 were the El Copaibo Municipal Reserve (28,620 ha) and the Noel Kempff Mercado National Park (21,957 ha).

In this department, the area burned in 2020 that did not burn in 2019 was 1.8 million ha. In protected areas, the area reached was 934 thousand hectares. “If we make a summation of the 2019 and 2020 fires, in Santa Cruz we have a total area impacted by fires of 5.3 million hectares for those two years,” details Oswaldo Maillard, an expert in Geographic Information Systems and Remote Sensing of the Foundation for the Conservation of the Chiquitano Forest (FCBC).

Herman Vaca Poñé, a forestry engineer from the municipality of San Ignacio de Velasco, assures that last year there were fires even before August, which is supposed to be the time when the “chaqueos” or controlled burns begin.  “They were sporadic because people already knew, but even so, the most affected were the national, departmental, and municipal protected areas. For example, in 2019 the Noel Kempff was not affected, but the fire did arrive last year. The San Ignacio municipal reserve, where there is a large amount of forest, was also affected. In Copaibo it was terrifying to see the fire advancing on a large scale,” he says.

Maillard agrees with the impact in Copaibo, where more than half of the area was under fire for two months. The situation was similar in Noel Kempff Mercado Park, an area of global importance because there were pristine (well-preserved) forests and savannahs that had not burned in a long time.

Except in Otuquis and San Matías IMNA, where the fire was recorded as early as March 2020 from ranches in the Pantanal area of Brazil, the Chiquitano Dry Forest Observatory (an information platform that monitors the state of conservation and restoration of the Chiquitano Dry Forest) showed that the burning outbreaks were provoked. Although the Authority of Social Control and Inspection of Forests and Land (ABT) banned the burning on August 4 in Santa Cruz and Beni, and subsequently throughout the country.

In this regard, Víctor Hugo Áñez, former executive director of the ABT, agrees that “the great majority of the fires were arson”. During his tenure, 17 people accused of starting forest fires were arrested; seven of them were sentenced, although only two were sent to the Palmasola prison in Santa Cruz and one to the San Roque prison in Sucre. Forty-eight criminal and 750 administrative proceedings remained in progress. “Of the 2019 fires there were only twenty or so administrative processes. That is, only an economic fine was going to be applied, there were no criminal proceedings,” he explains with respect to when he took office in November 2019, after a revolt that resulted in the departure of then-President Evo Morales.

Among the processes initiated, small, medium, and large farmers, as well as peasants and indigenous communities are accused. The detainees were found in flagrante delicto, in operations coordinated with the Police and the Armed Forces, according to the ex-authority.

Without sufficient resources and in the middle of a pandemic

One of the major obstacles in dealing with the 2020 fires was the lack of economic resources, given the priority given by the Bolivian government to the pandemic by Covid19.

Cecilia Miranda, who took over the Planning Directorate of the National Protected Areas Service (Sernap) in November 2019, explains that the entity had a budget deficit or financial gap of 22 million Bolivianos (about US$3.1 million). “We are talking about a budget of 70 million Bolivianos (about ten million dollars) for 22 national protected areas and about 500 people, of which, 300 are park rangers, but most are temporary staff,” she assures.

To the already old economic weakness of this system, Covid-19 and the consequent drop in tourism, a source of Sernap’s own income, were added. In 2019 alone, the collection for this concept reached Bs 23.5 million (about US$ 3.3 million), with the Eduardo Avaroa Reserve being the most visited. In 2020, a loss of Bs 7.7 million (US$1.1 million) was calculated in that protected area alone, according to a document we accessed.

In addition, a budget support fund from the European Union that had been requested arrived with a six-month lag, so for seven months of 2020, the national parks were left without resources for operating expenses. “Despite the coronavirus, there were park ranger activities. In many areas the logistical issue was solved with the support of local NGOs, friendly organizations, management committees, or the personnel themselves, who financed the fuel with their own resources,” explains Miranda.

It did so with food, rehydration drinks, medicines, water for firefighters, park rangers, and animal rescue brigades; medicines for fauna, fuel, and tools, among others. “There were 45,246 Bolivianos (US$6,500) that we used in purchases between September and December, thanks to cash donations. We also received donations from companies,” says Daniela Justiniano, a representative of the group.

In all these processes, the park rangers are fundamental in conservation and firefighting. Cecilia Miranda, an anthropologist with 25 years of experience in protected areas, has been working to strengthen the capacities of these men and women for two decades.

She explains that of Sernap’s 300 park rangers, more than 100 are temporary and their working conditions are precarious. “I believe that they are among the best that the Service has as a result of long processes of investment in training, with the support of international cooperation since 1994. Most of them are experts and forest firefighters. When it comes to dealing with forest fires, they are the ones who are on the front line,” she says.

The labor situation to which Miranda refers is a series of changes of directors and protection chiefs since the end of last year. For the preparation of this report, an attempt was made to know the position of the current director of Sernap, Teodoro Mamani, but although he agreed to give an interview, his communicator explained that “he was very busy”. After a mobilization of citizens and professional associations, Sernap announced in a communiqué that more than 300 officials were ratified and that the directors were assigned on an interim basis. A few weeks ago, a call was launched for the direction of five national parks.

There was a lot of dissatisfaction with the appointment of people who did not have the technical profile to be in charge of these reserves. Until the year 2000,” recalls Miranda, “the technical profile was respected, especially at the protected areas and central unit levels. “When there was a change of government, only the executive and the four directors in the central unit were modified.”

Although most of the interviewees agree that during the transition government of President Jeanine Áñez, there was better coordination to address the forest fires of 2020, the political issue was still a major factor.

A source from Kaa Iya National Park, who asked not to be identified, lamented, for example, that when a fire was detected inside the reserve, the Ministry of Environment asked “not to make it public” because of the general elections of last October approaching. “That (the political issue) has been a major constraint, the big obstacle in any government. For us there was no change (in 2019), it was the same as every year,” says the source.

Faced with this panorama, both experts and volunteers agree on prevention as a solution to the fires that are expected to affect territories again. Training firefighters in communities, for example, is one of the tasks that NGOs such as Savia are considering.

Dalcy Cabrera, an inhabitant of Santo Corazón in the San Matías AMNI, decided to be part of a group of six people trained in firefighting last year. She did so aware that if these phenomena are not dealt with soon, it is difficult to control them.

“One sees the plants, the animals, how they run, how they flee to get out of that heat that is in the bush and it’s not good. I am going to continue training. I plan to be a constant firefighter. My husband is happy and since I heard that they said they were not going to discriminate against women, I got involved. Last year the fires came close (to the town) and that must be avoided,” she says proudly.

Did you know that thanks to people like you, who believe in what we do, you can read all of our content at no cost? Much of our journalistic work is supported by contributions from # AmigosdeLaRegión, a community committed to the environment and ecotourism. Write to us at 70079347 or click here